The St. Clairsville-Richland City School District is located in the city of St. Clairsville in Belmont County, Ohio.  The St. Clairsville band program serves the students of both St. Clairsville Middle School and High School.  The band program begins in the 5th grade and offers students the opportunity to perform in a variety of ensembles including concert band, marching band, jazz band, pep band, pit orchestra, and other various smaller ensembles.  In the past few years, the bands at St. Clairsville have had the opportunity to perform in Nashville, Bahamas, New York City, and Disney World.  Band members participate in OMEA District 9 solo & ensemble festival and large group adjudication.  Students are consistently selected to participate in district and regional honor bands.  In addition to their dedication to the band, many St. Clairsville Band members can also be found singing in choir, acting on stage, playing a sport, excelling in academics, and being leaders in clubs and other organizations.
Absence Excuse Form for Marching Band

In the wake of the COVID-19 pandemic, members of the St. Clairsville Band Program took to their porches and played music for the community.  From beginning band members who just started on their instrument this year to seniors and even band alums.  The Porch concerts have continued every Thursday evening at 7pm.  Performances have been posted and shared of Facebook each week using the hashtag #stcporchconcert
https://wtov9.com/news/coronavirus/st-clairsville-band-presenting-porch-concerts

Members of the High School Band traveled to Disney in early March of 2020.  Band members enjoyed time in each park and had the opportunity to participate in a Disney clinic with professional Disney Performing Arts clinicians.  A magical experience with life-long memories! 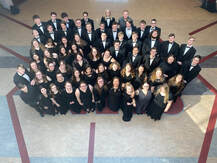 The St. Clairsville Concert Band earned straight "superior" ratings at O.M.E.A District Large Group Adjudication.  Held at Newark HS on March 7th, 2020, the band performed three prepared pieces and sight reading.  This marks the 6th year in a row for the concert band to receive a superior rating, qualifying them for the state level. 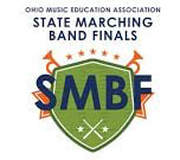 The band concluded their competitive season at the O.M.E.A State Marching Band Finals held at Brunswick High School on November 9th.  The band earned the highest overall rating of "Superior" for the second year in a row.  During the season, the band finished first in their class at every competition and also won two grand championships awards. 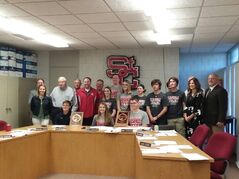 The Band Program at St. Clairsville had a record breaking year.  The band earned the highest rating of Superior at state marching band finals.  The concert band earned straight superior ratings at both the district and state level.  The concert band also earned the highest rating of gold at the Big Apple Classic.  In addition to these honors, the band functions as a source of pride for the school and community by performing at many sporting events, school activities, and community functions.  The band was recognized by the Board for Education for their high achievements.  These accolades were echoed by WTOV9 News.
https://wtov9.com/news/local/st-clairsville-marching-band-season-ending-on-a-high-note

The band traveled to New York City on March 15-18 performing in the Big Apple Classic.  The band earned the highest rating of GOLD for their performance!  In addition, members had the opportunity to see Phantom of the Opera, Lion King and visit the Statue of Liberty, One World Trade, 9/11 Memorial, Little Italy/Chinatown, Ellis Island, Times Square, Top of the Rock

The St. Clairsville High School Concert Band received a "superior" rating at OMEA District 9 Large Group Adjudication.  This is the fifth year in the row the band has earned the highest rating.  The band program has earned state honors for both marching and concert band the past four seasons.

The "Red Devil" Marching Band earned the first OMEA State SUPERIOR rating in school history!  The band performed their 2018 show "Under My Umbrella" at Brunswick HS on November 3rd.

Band performs in the bahamas!

Members of the "Red Devil" Marching Band traveled and performed on the Majesty of the Seas while visiting Nassau, Bahamas

Band reaches State Level for 4th year in a row!

The St. Clairsville High School Concert Band received a "superior" rating at OMEA District 9 Large Group Adjudication.  This is the fourth year in the row the band has earned the highest rating.  The band program has earned state honors for both marching and concert band the past three seasons.

The "Red Devil" Band earned a superior rating at the September 23rd Revere Competition.  This marks the third year in a row the band has qualified for state marching band finals.

Members of the St. Clairsville HS Band will be performing in Nashville, TN.  Band members will have the opportunity to visit the Grand Ole Opry, The Hermitage, Wildhorse Saloon, Country Music Hall of Fame and even make a recording in historic RCA Studio B!

The Concert Band earned a Gold Rating for their performance and won grand champion!

The St. Clairsville High School Concert Band received a "superior" rating at OMEA District 9 Large Group Adjudication.  This is the third year in the row the band has earned the highest rating.  The band program has earned state honors for both marching and concert band the past two seasons. 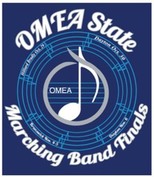 The "Red Devil" Marching band qualified for state finals for the second year in a row.  The band performed at Brunswick HS and received an overall "Excellent" rating. 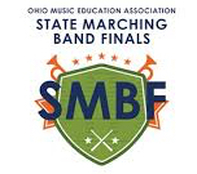 The "Red Devil" Marching Band earned a Superior Rating at the River View band competition, which qualifies the band for state marching band finals.  The band will travel to Brunswick HS on November 7th and perform with some of the best marching bands from across the state! 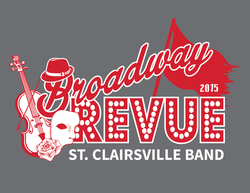 The "Red Devil" Marching Band performed the past two weekends at OMEA competitions in Licking Heights and Cambridge.  The band earned a 2nd place trophy at both competitions and an Excellent Rating. 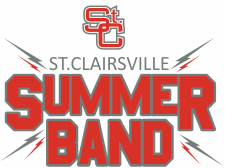 The St. Clairsville Band hosted it's 3rd annual Middle School Summer Band Week!!  Students rehearsed during the week and performed a concert at the end of the week.  This year, over 65 musicians participated in the summer band week and they put on an outstanding concert!!

Members of the 7th and 8th grades bands performed as a soloist or in a small ensemble at our District Solo & Ensemble Adjudicated Event.  Out of 19 events, they earned 16 superior ratings and 3 excellent ratings!

The St. Clairsville "Red Devil" Marching Band performed on the USS Intrepid in New York City.  During the stay in the big apple, the band visited the top of the rock, 9/11 memorial, times square, and took in the Broadway musicals The Lion King and Mama Mia!  See the band on deck of the USS Intrepid!!

Congratulations to the members of the St. Clairsville high school concert band.  They performed at the District 9 OMEA Large Group Adjudicated Event and earned a superior rating.  This rating qualifies the band to perform at state large group in May!

Congratulations to the members of the St. C Middle School 7th and 8th grade bands.  A recorded number of students participated in the District Solo & Ensemble Festival this year.  Students could perform a solo or in a small ensemble of 3 or more.  The students earned 29 superior ratings and 12 excellent ratings this year.

WTOV9 Band of the Week

The St. Clairsville "Red Devil" Marching band is featured on wtov9.com as the band of the week for September 21st.  The band performed their halftime production at Martins Ferry Stadium.  Click here to check out the video of the band!

Congratulations to the members of the St. C Middle School Concert Band.  They performed for the District IX OMEA Junior High Large Group Adjudication held at Marietta High School.  The band received a superior or 1 rating from the judges.

Members of the band traveled to Disney World and enjoyed 4 days at the parks, Epcot, Hollywood Studios, Magic Kingdom, and Animal Kingdom.  They performed for Festival Disney at Hollywood Studios and received a clinic from an esteemed college band director.

Congratulation to senior band member Leandra Reed.  Leandra was selected from thousands of audition tapes nationwide to be a member of the Macy's Great American Marching Band, and will be marching in the Macy's Thanksgiving Day Parade!
Tweets by @STCbands